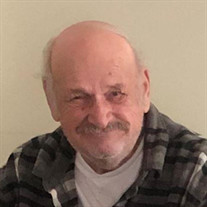 Robert (Bob) Clevenger, son of Albert and Mary Clevenger, a strong and devoted husband, father, grandfather great grandfather, and brother went to heaven on January 17, 2022 at the age of 87. Bob is best known for his strength, lifelong work ethic, unwavering dedication to his wife and family and his love of hunting and fishing. In high school, Bob was a football player and was known as Bob the “Bulldog” Clevenger; went on to honorably serve his country in the Navy during the Korean War on the aircraft carrier, the USS Coral Sea; was a construction foreman, and finally found his calling as one of the top Prudential Insurance Representatives of his time. Preceding Bob to heaven was his loving and amazing wife of 53 years, Rose Clevenger. Surviving Bob are children Donald Clevenger and wife Holly Clevenger, Donna Nelson and husband Edward Nelson, Melanie Wassel and Robert A. Clevenger; grandchildren Christopher Southard and his wife Carrie, Kristin Distler, Melanie Vedder and husband Erik, Paul Wassel, Donald Blair, Edward Nelson II and his wife Hayley and Robert D. Clevenger; 12 great grandchildren, and brother Albert Clevenger. Preceding Robert in death is his sister Jeanette Clevenger. For the safety of all, private services for Bob will be held on Friday, January 28, 2022, at Perincheif Chapels 438 High Street, Mount Holly, NJ 08060 followed by burial at Columbus Cemetery, Columbus, NJ at 12 noon. We invite all who wish to attend services please do so virtually via Zoom at 11 a.m. on January 28, 2022. The Zoom information to attend the virtual service is Meeting ID 865 4673 9268 Passcode Clevenger1 . Anyone who wishes to pay their respects to Bob at the gravesite, are invited to do so at 12 Noon. The outspoken nature, strength, love, and dedication of Bob Clevenger will always be cherished and ingrained in our hearts.

Robert (Bob) Clevenger, son of Albert and Mary Clevenger, a strong and devoted husband, father, grandfather great grandfather, and brother went to heaven on January 17, 2022 at the age of 87. Bob is best known for his strength, lifelong work... View Obituary & Service Information

The family of Robert H. Clevenger created this Life Tributes page to make it easy to share your memories.

Send flowers to the Clevenger family.