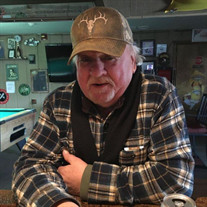 Roger L. Danser, 69, of Pemberton, NJ, passed away on Wednesday, February 2, 2022. Roger was born in October 1952, in Mt. Holly, NJ. He was a 1971 graduate of Rancocas Valley Regional High School. Roger worked many years for Bradley Corporation before starting his career with the Township of Southampton Grounds Department, where he later retired. Roger will be fondly remembered for his quick wit, sense of humor and contagious laugh. He had a heart of gold, was extremely protective of the people he loved the most and will be deeply missed. If you had the opportunity to have known Roger for a lifetime or just met him once at one of his favorite “watering holes,” you had a friend for life. Roger was known for his perfect rendition of “Wonderful World” and would brighten any room he walked in to. On most Sundays, you could find Roger watching a football game with his buddies Mike and Bruce, and calling family to make sure they were watching the same game. Roger also enjoyed a nice smoked cooked meal by his son Jason, sitting by the fire with his grandsons, and just overall being with his family and friends. Son of the late Claude and Susann Danser (nee Beebe), Roger is survived by his two sons, Jason Danser (Heather), and Joshua Danser (Rebecca); two brothers, Jerry Danser, and Kenny Danser (Naomi); three sisters, Beth Daley (Ed), Susann Brosius (Frank) and Lillian Rucker (Glen); and many nieces and nephews. He was the proud grandfather of his two grandsons Justin and Jared Danser. Roger was preceded in death by his brothers, David Danser, Donald Danser, George Danser, Tom Danser and Claude Danser, Jr.; a sister, Elaine Lurty (nee Danser); and many nieces and nephews.

The family of Roger L. Danser created this Life Tributes page to make it easy to share your memories.

Send flowers to the Danser family.