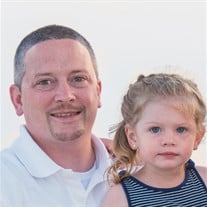 A sweet soul taken too early. Theodore J. Gourley III passed away due to natural causes on July 7, 2021. He had just turned 40. He will be dearly missed and has left behind a heartbroken family. Ted or Teddy, as he was affectionately called by family and friends, was a loving brother and son, caring nephew, loyal friend and above all a proud father to his darling daughter. He is survived by his daughter, Isabelle Grace Gourley, sister Katrina Colleen Gourley, and twin brother Jonathan Samuel Gourley. Ted lived in Mt. Holly for most of his life. He attended Rancocas Valley High School and was an accomplished wrestler on both the Junior Varsity and Varsity teams. He was awarded a college scholarship for his talent in wrestling and attended Western New England University in Springfield, Massachusetts. Unfortunately, Ted was involved in a tragic auto accident during his college career that ended his ability to wrestle. He transferred schools after his recovery graduating with a Bachelor’s in Political Science from Stockton State University. Ted went on to have a career as a financial professional at Prudential and had recently shifted to an enjoyable sales position at Pierce Phelps Heating and Cooling before his passing. As a child, Ted enjoyed skiing and camping with the family, which he continued into his adult life. He enjoyed staying active and challenging himself physically. Ted had a good sense of humor and a lovely, deep, warm chuckle that the family remembers fondly. This warm laugh was heard most often when Ted spoke about his daughter Isabelle or Izzy as he fondly called her. One could hear the pride and love he had for his daughter whenever he spoke of her. Ted was cremated and will be buried with his parents in the Mt. Holly cemetery. There will be a small, closed graveside service to celebrate his life and the life of his deceased parents, Theodore and Marlene Gourley, who passed away a few months before him. Before Ted began his career with Prudential, he worked as a social worker helping at risk youth. He had a passion for mentorship and making a positive difference in the lives of at-risk teens. Donations in his honor can be sent to a local non-profit, The Crossroads Programs, dedicated to empowering youth who have experienced trauma encouraging them to lead healthy, productive lives. https://crossroadsprograms.org/ways-to-donate/memorials-and-honorary-gifts/ Alternatively, donations can be made in his name to the Alzheimer’s Association in honor of his father and grandmother who he watched suffer from the disease. https://www.alz.org/

A sweet soul taken too early. Theodore J. Gourley III passed away due to natural causes on July 7, 2021. He had just turned 40. He will be dearly missed and has left behind a heartbroken family. Ted or Teddy, as he was affectionately called... View Obituary & Service Information

The family of Theodore J. Gourley III created this Life Tributes page to make it easy to share your memories.

Send flowers to the Gourley family.