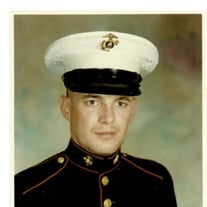 Thomas Alfred Nelson of Cherry Hill, passed away on Friday, April 10, 2020 at Thomas Jefferson Hospital in Cherry Hill. He was 74. Born in Mount Holly, the son of the late Thomas and Mary Nelson and the grandson of the late Agnes M. Hackett, Tom attended Sacred Heart School in Mount Holly and was a graduate of Rancocas Valley Regional High School in 1964. After graduation, he joined the US Air Force and served 4 years. Tom married his high school sweetheart, Carol Blue, in November 1966. Tom then joined the Marine Corps and served 22 years, retiring in 1990 as an E-7 Gunnery Sergeant. He spent much of his service as a Career Planner, counseling Marine Corps members to help guide their futures. Throughout his military career, Tom was able to travel the world and had many great experiences. The Nelson family, then Tom, Carol and son Tommy, had the pleasure of living in Hawaii, where his first daughter Heather was born. Later while living in Quantico, VA, the family welcomed their second daughter, Hollie. While serving as the head of the Marine Corps guard at the U.S. Embassy in Luxemburg, Tom organized a U.S. style rodeo for the public that was very well received. During his career, he also had the pleasure of travelling to places such as Egypt, France, Germany, Panama, and Thailand. Tom owned and operated one of the first paintball businesses of its kind in North Carolina called “Nelson’s War Games.” In addition to being commercially successful, the games provided him a hobby that he was able to share with both his immediate and extended family members. Tom was competitive and he loved a good challenge. From running races with his brothers as boys, to volleyball in the backyard, to softball games at family parties, to good old fashion poker games, Tom always knew what to say to get you to play. Tom’s competitive nature was perfect for coaching his children’s sports teams; he knew how to motivate and inspire. His enthusiasm and support was felt not just by his children, but also by his nieces and nephews. He made you believe you could achieve anything, provided you had the right tools for the job and a willingness to work hard. Above all, he loved spending time with his family and sharing a laugh or a story. His distinctively unforgettable laugh made you wonder if he was up to something… he often was. Semper Fi, Gunny! Husband of the late Carol Nelson, née Blue, and father of the late David and Thomas, III; he is survived by his daughters: Heather Marsden of Alaska and Hollie Nelson of Cherry Hill; 3 grandchildren: Zoe, Renee and Shamus; 1 great grandson: Dexter; 2 sisters: Judith Comegno and Nancy Mallett and 2 brothers: Alfred Thomas and Steve Thomas; and many beloved nieces and nephews. Funeral Services will be private. Contributions in his memory may be made to Covid19responsefund.org, Meals on Wheels, Feeding America or Team Rubicon. Arrangements by the Perinchief Chapels, Mount Holly www.perinchief.com

Thomas Alfred Nelson of Cherry Hill, passed away on Friday, April 10, 2020 at Thomas Jefferson Hospital in Cherry Hill. He was 74. Born in Mount Holly, the son of the late Thomas and Mary Nelson and the grandson of the late Agnes M. Hackett,... View Obituary & Service Information

The family of Thomas Alfred Nelson created this Life Tributes page to make it easy to share your memories.

Send flowers to the Nelson family.