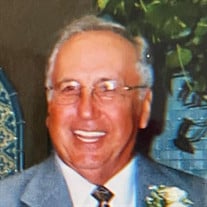 Thomas Will Sr. 89, passed away peacefully May 4th, 2022 after his long courageous fight against Parkinson’s Disease and Cancer. His courage and sense of humor never wavered showing his true “Will Power”. He told jokes to anyone that would listen with a smile on his face, and never missed an opportunity to tell his wife Eunice, she is the prettiest girl in the room until the very end. Throughout his life he never missed a chance to tell his family how much he loved them. He made it a point to always leave the people in his path happier than they were when he arrived, he succeeded. He served in the US Army during the Korean War followed by 36 years with NJ Bell (now known as Verizon) as Communication Manger. He was a past President of the Burlington County United Way, member of the National Alliance of Businessmen, NJ Jaycees and Mount Holly Rotary. He was an avid golfer, fisherman, hunter, boater and pilot. His was a loving and supportive husband, father, grandfather, great grandfather. He was a loyal friend to anyone he met that was willing to trade a few jokes and a share a story. Tom is survived by his beloved wife of 68 years Eunice Will (nee Eble), his two children Bonnie Will Beierschmitt (Francis Sr) of Lumberton NJ, and Thomas Will Jr. (Ruth) of Hainesport NJ, Grandchildren Francis Beierschmitt Jr. (Tara), Steven Beierschmitt (Lara), Sarah Haas (Matthew) and Thomas Will III. Great grandchildren Frankie, Jace, Madison, Mason, Jett, Matthew, Carter, and Hunter. Other surviving relatives are Lark Will, Jacksonville FL and Dennis Lott, Ventnor NJ. Relatives and friends may attend his visitation at Perinchief Chapels, 438 High Street in Mount Holly on Tuesday May 10, 2022 from 10:00 – 11:00 a.m. followed by a service at 11:00 a.m. The burial will be private. In lieu of flowers the family requests donations to the Parkinson’s Foundation or the American Cancer Society. Watch Tom's tribute video here: https://www.tributeslides.com/tributes/show/2FZ2H3CY2GLXXHDM

Thomas Will Sr. 89, passed away peacefully May 4th, 2022 after his long courageous fight against Parkinson&#8217;s Disease and Cancer. His courage and sense of humor never wavered showing his true &#8220;Will Power&#8221;. He told jokes to anyone... View Obituary & Service Information

The family of Thomas R Will created this Life Tributes page to make it easy to share your memories.

Send flowers to the Will family.