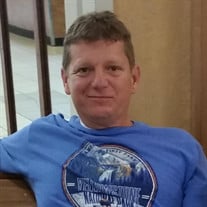 Todd R. McHale, aged 55, Maple Shade, NJ died on Thursday, January 13, 2022 at Penn Presbyterian Hospital in Philadelphia, PA after a brief illness. Todd was born in Centralia, IL to Kenneth and Mary Dawn (Fuller) McHale, and was the younger of two children. As a child he moved around, living at various times in Centralia, Highland, Mt. Vernon and ending up in Cahokia, IL where he graduated from Cahokia High School. As a child, he loved to camp with his grandparents, ride ponies, play ice hockey and mostly go to St. Louis Cardinals and St. Louis Blues games with his father. Travelling was something he always yearned to do and as a teenager, he moved to Daytona, FL to live the “spring break” life. While there he worked many jobs, teaching dance at Arthur Murray, working at a scrap yard and various other odd jobs while putting himself through college. He eventually graduated from Daytona Beach Community College, and used that degree to graduate as a journalism major from University of Central Florida. Todd worked at various news sources before choosing to travel again, leading him to Palmyra, NJ and the Burlington County Times. It was here that he finally decided to settle down, met his future wife Susan and after a long courtship, she finally got him to the altar. His desire to travel never waned and often the two would be off on one adventure or another, going to all the Major League Baseball Parks, National Parks, and major cities. Despite dealing with many health issues, Todd chose to live life defining himself by his capabilities. He chose to quietly exit journalism to focus on the next phase of his life, becoming the best husband and dog dad he could be. After buying a home in Maple Shade, he started on renovations the best he could. He would often be seen working around the yard and playing with his best pup, Henry. Preceded in death by his parents, Kenneth and Mary Dawn McHale, Todd is survived by his wife Susan Rohrer McHale; sister Erin (David) Hoffman, niece Melissa (Ryan) McCoy and nephew Ryan (Lorine) Hoffman, all of Wentzville, MO; father-in-law Edgar Rohrer, brother-in-law John Rohrer and nephew Zachary Rohrer. A memorial service for Todd will be held on Saturday, February 5th at 12pm at Perinchief Chapels, 438 High Street Mount Holly, NJ 08060. Friends and relatives are invited to visit with Todd’s family from 11am-12pm prior to the start of the service. In lieu of flowers, the family requests that donations be made to the National MS Society, Rheumatoid Arthritis Foundation or Burlington County Animal Shelter.

The family of Todd Raymond McHale created this Life Tributes page to make it easy to share your memories.

Send flowers to the McHale family.