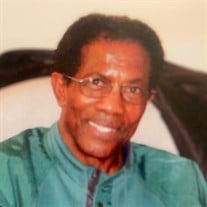 Van L Barry has earned his angel’s wings. He answered the call peacefully on Sunday, 8 December 2019 and took his final flight home to be with the Lord. Our hearts are less bright but we know that Heaven is filled with extra doses of love, joy, peace and laughter. Van was born on 14 September, 1935 in Columbus, Mississippi to the late Laura L and Willie B Gray. He is one of 8 children, 4 boys and 4 girls. He attended public school in Columbus, Mississippi and upon graduation, he enlisted into the United States Army to proudly serve. Van honorably served his country and served a tour during the Vietnam War. In addition, he served in Korea and twice in Germany, as well as bases stateside. In 1979, he retired as a Master Sergeant with 22 years of service and settled down in Eastampton, New Jersey with his family. After serving in the military, Van was employed at New Lisbon Developmental Center for one year. He then accepted a position with Yardville Correctional Facility, where he officially retired in 2000. Van treasured life, and was dedicated to his family and friends and led by example. If you needed him, without question, he was there. His commitment to service in the military was also his character in his everyday life. He loved spending time with his family and friends. During his retirement, his greatest joy was being able to spend time at sporting and school events for each of his four grandchildren. Van was also an active member of the Fort Dix Main Post Chapel. At the Chapel he regularly served as an usher and participated in many events. He was a very spiritual, yet quiet man who touched the lives of many people and will be deeply missed by family, friends, and all who knew him. He was predeceased by his father, Willie B Gray; his mother, Laura L Gray; his sister Yvonne Barry; and his brother Willie Gray. Van’s memory will be cherished and forever remembered by his wife Adelle Barry; his daughter, Audrey J McGraw (Thomas); his son Van B Barry, (Rhonda); his grandchildren Dante, Jourdan (Audrey), Brylee, Van (Van); his great-grandchild Noah (Jourdan); his brother, John B Barry; his sister, Betsy Hurt; his sister, Vera Flournoy (Arthur); his brother, Willie Mac Gray; his sister, Gloria Wilson; as well as host of nieces, nephews, cousins, other relatives, neighbors, military friends and Fort Dix Church family. Friends and Relatives may visit with the family from 10-10:30am at the Fort Dix Chapel, 5240 New Jersey Ave Ft. Dix NJ 08640 on Tuesday December 17, 2019. Services will follow the visitation at 11am. Interment and Military Honors will be held at Brid. Gen. William C. Doyle Veterans Memorial Cemetery at 1pm.

Van L Barry has earned his angel&#8217;s wings. He answered the call peacefully on Sunday, 8 December 2019 and took his final flight home to be with the Lord. Our hearts are less bright but we know that Heaven is filled with extra doses of... View Obituary & Service Information

The family of Van L. Barry created this Life Tributes page to make it easy to share your memories.

Van L Barry has earned his angel’s wings. He answered the call...

Send flowers to the Barry family.