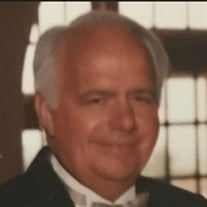 W. Douglas Gsell passed away peacefully, Wednesday, September 11, 2019 at the Samaritan Hospice Inpatient Unit in Mount Holly. He was 85. Born in Mount Holly, Doug was the longtime President and Owner of Gsell Moving and Storage and agent for Bekins Van Lines. He was the1948 Mount Holly Soap Box Derby Champion and placed 5th Nationally in Akron, Ohio. For many years, Doug served as Mount Holly’s Soap Box Derby Director. He was a Marine Corp Veteran. Doug was always very active in the greater Mount Holly community. He was a member of Good Intent Fire Co, member and Past Exalted Ruler of the Mount Holly Elks #848, member and Past President of the Mount Holly Rotary Club, a Board Member of the Burlington County Boy Scouts of America. Doug served on the Mount Holly Town Council and was Deputy Mayor for many years. Doug enjoyed playing golf and was a longtime member of Burlington County Country Club and enjoyed the outdoors and hunting as a member of the Atlantic County Game Preserve. The husband of the late Helene and the father of the late Michael. His sister Berna Detta Watson and sister-in-law Mimi Smith also preceded him in death. Doug is survived by his son and daughter-in-law: David and Beth Gsell of Jacksonville, FL; daughter and son-in-law Nancy and Peter Calcara of Mechanicsburg, PA; and a daughter-in-law Kelly Gsell of Mount Holly; 8 grandchildren: Christopher, Gregory, Andrew, Sarah, Rachel, Mikaela, Daniel, and Morgan; and 3 great-grandchildren: Hunter, Josey, and Jack. He is also survived by brothers-in-law Russell Watson and Dr. Kent Smith as well as nephews: Jim Moore, Craig Barton, Kent Smith and niece Walt Davenport. Friends may visit with the family on Saturday, September 21, from 10am – 12 noon at the Perinchief Chapels. An Elks service will be held at noon, followed by a Memorial Service. In lieu of flowers, contributions in his memory may be made to the Mt. Holly Elks for the Special Children’s Fund or to the Mount Holly Rotary Scholarship Fund.

W. Douglas Gsell passed away peacefully, Wednesday, September 11, 2019 at the Samaritan Hospice Inpatient Unit in Mount Holly. He was 85. Born in Mount Holly, Doug was the longtime President and Owner of Gsell Moving and Storage and agent... View Obituary & Service Information

The family of W. Douglas Gsell created this Life Tributes page to make it easy to share your memories.

Send flowers to the Gsell family.