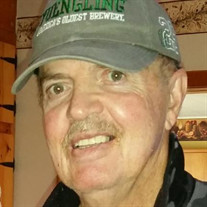 William R. “Bill” Craft, age 79, of Westampton was received into the arms of his eternal father on September 9, 2020. Bill was born June 14, 1941, he grew up in Columbus, NJ graduated with a BS in Biology from Rutgers, served his country in the Army, and retired in 2007 from being head of Weatherization Dept. at BCCAP. Bill leaves to mourn his passing and cherish his memory: his wife of 46 years, Judy of Westampton, NJ; his children: Will Craft of Ewing, NJ, John Craft of Denton, TX, Michael (Tiffany) Craft of Westampton, NJ, Jala (Adam) Kidd of Troy, PA, David (Melissa) Craft of Westampton, NJ, Dinaija Craft of Westampton; brothers David Craft of Ft. McCoy, FL, Richard Craft of Columbus, NJ, Paul Craft of Florence, NJ, and cousin Pete Cafone of Santa Cruz, CA who was like a brother. He was predeceased by daughter Faith and son Derrick. Bill also leaves 13 grandchildren, and many brothers and sisters-in-law and nieces and nephews. Bill was a loyal and devoted family man, known for his unconditional love for all of his children. Bill was a man of faith, strong morals, and integrity. He enjoyed reading, attending any sports his children and grandchildren participated in, bird watching, and spending time in nature, especially in West Texas. In keeping with Bill’s wishes, his body was donated to scientific research and a life memorial will be held at a later date. Contributions in his memory may be made to the Parkinson’s Foundation.

The family of William R Craft created this Life Tributes page to make it easy to share your memories.

William R. “Bill” Craft, age 79, of Westampton was received into...

Send flowers to the Craft family.