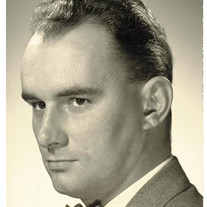 William G. Dunn Sr. of Mount Holly passed away on August 7, 2017, after a full and energetic life. He was 91. Bill was born in Oradell, NJ, on January 26, 1926, and grew up in Cranbury. He was a World War II army veteran. He graduated from the University of Rochester in 1954. Bill was a long time Regional Sales Manager for WR Meadows overseeing construction and engineering projects across the country. Bill began his service to the Mount Holly Municipal Utilities Authority first as a board member and Chairman and for 30 years as the full-time Executive Director. Under Bill's leadership the authority upgraded and expanded treatment systems and became a model of ground breaking technology in the area. Bill retired from the MHMUA at the end of 2012 at the age of 87 and was honored with a Joint Legislative Resolution by the New Jersey Senate and General Assembly. Bill and his wife Ruth resided in Mount Holly for over 61 years. Mr. Dunn was also active in the Mount Holly community and served as Deputy Mayor and Town Councilman. He was a member and Past-President of the Mount Holly Rotary Club, a member of the Mount Holly Lions Club, and the Mount Holly Elks. He was also active in helping to establish the Mount Holly First Night and frequently was a judge for many Mill Race and downtown Mount Holly events. Bill is survived by his wife of nearly 66 years, Ruth; three children: daughter Roberta (William) Bartley Boca Raton, FL, daughter Alexandra Dunn of West Palm Beach, FL, and son William G. Dunn, Jr. of Mount Holly; and three grandsons: Michael Bartley, Connor Pleban, and Kyle Pleban. Friends may attend his visitation on Friday evening, August 11, from 6-8 PM at the Perinchief Chapels, 438 High St., Mount Holly. A Memorial Service will be held on Saturday afternoon August 12, at 1:30 PM at the Funeral Home. In lieu of flowers, contributions in his memory may be made to the University of Rochester or Penn Medicine.

William G. Dunn Sr. of Mount Holly passed away on August 7, 2017, after a full and energetic life. He was 91. Bill was born in Oradell, NJ, on January 26, 1926, and grew up in Cranbury. He was a World War II army veteran. He graduated from... View Obituary & Service Information

The family of William G Dunn Sr. created this Life Tributes page to make it easy to share your memories.

Send flowers to the Dunn family.