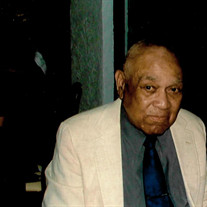 William (Bill) P. Jackson, 94, left this earth on October 23, 2021. He was born on December 31, 1926 in Nadawah, AL, son of Ezell and Beatrice (Grace) Jackson. He was the fourth of eight children. After graduating from high school in 1944, he enlisted in the US Army. "He toured the world", he used to say. But one country he loved most was Germany. There he met his soon-to-be bride Monika Elsholz, they have been married for 64 years. Bill served 24 years in the Army and Honor Guard. He was a SFC (E7) serving 2 tours in Korea and one in Vietnam. After retiring from the army, he worked as a car salesman for 21 years at Reedman Corporation in Langhorne, PA. While Bill was stationed in Ft Dix, he was an avid and passionate golfer, becoming a member of the Ft Dix Golf Club. In addition to his parents, he was predeceased by two sisters, Gladys and Jean and one brother, Cecil. Surviving in addition to his wife, Monika (Elsholz) Jackson, are his two sons Romel of Los Angeles and Vancer of Mt Laurel; his two daughters Beatrice Maldonado of East Rutherford, Monica and her husband John Dewedoff of Wenonah. Seven grandchildren, Giana Maldonado, Jesus Maldonado, Marques Jackson, Julio Maldonado, Sarunas Jackson, Bianca Maldonado, Darius Jackson and 7 great-grandchildren. A brother Ezell Jackson of Harrisburg, PA and three sisters Bernyce Mills, Eunice Carr and Elizabeth Jackson of California along with many nieces and nephews. A service of remembrance will be held 11am, Sunday October 31 at Perinchief Chapels 438 High Street Mount Holly NJ 08060. Friends and relatives are invited to visit with the family prior to the service from 10am-11am. Those who wish to honor or remember Bill may make gifts to the Disabled American Veterans at www.dav.org/donate. Bill's Service will be streamed on ZOOM meeting ID 895 884 3508 password Jackson123

The family of William P. Jackson created this Life Tributes page to make it easy to share your memories.

Send flowers to the Jackson family.