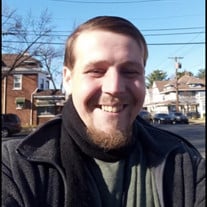 William Joseph Trump, Jr., of Mount Holly, passed away suddenly on Monday, May 3, 2021. He was 38. Born in Mount Holly, NJ; the son of Margaret & the late William Joseph Trump, Sr. Bill’s story is one that is all too familiar today and has touched many families. To know Bill is to know the struggle of addiction, and the promise of sobriety. To many, they only knew the addiction, but to those closest to him, they knew the promise of his life without addiction. The moments of sobriety were washed away like the changing tides of the ocean with the cycles of relapse and recovery. In recovery, Bill was a hard worker, confident, caring and loving but while in relapse, he was distant, ashamed and embarrassed. Bill did not want to be an addict, no one ever does, but at a very young age addiction took hold and had ripple effects through the rest of his life. As a child, Bill showed promise as an athlete in wrestling and baseball. He loved fishing with his father, playing wiffle ball in the back yard, and riding go carts. But even before he could show his talents, addiction had taken its hold. In the intervening years, the cycles of relapse and recovery stretched and broke many relationships. To some, staying away was the best way to support him, with the hope that one day he would be back. Bills most recent time in recovery showed the most promise for his future. Prior to his father’s death, the two of them were inseparable. As time in recovery went on, Bill found love and had a beautiful daughter. Things started to turn around for Bill, but when his father passed, his true North was lost. For 254 days, Bill mourned his father death in his own way. He struggled to stay sober while the vicious cycle of relapse and recovery played out, finally ending in his death. With Bill’s untimely and early death, worlds have been shattered and prayer left unfulfilled for the hope of having the long-lasting recovery. We know that Bill Jr. is now with his father, Bill Sr. walking in paradise unincumbered by the burdens of this life. William is survived by his daughter, Winter Violet Trump; loving partner, Amber Myers; mother, Margaret Trump; brothers, Jesse Trump & Gary Grant Jr.; nieces, Kaila & Natalie; nephews, Gary III & Ryan; & numerous aunts, uncles & cousins. He is predeceased by his father William Joseph Trump, Sr. in 2020, maternal grandparents, Edward & Margaret Cox; & paternal grandparents, Theodore & Carolyn Trump. Family & friends may attend his viewing on Monday, May 10 from 6-7 PM at Perinchief Chapels, 438 High St., Mt. Holly. A Celebration of Life service will begin at 7 PM at the funeral home. Interment is private. In lieu of flowers, memorial contributions can be made in William’s memory to: https://www.gofundme.com/f/to-assist-in-funeral-costs-and-support-for-winter

The family of William Joseph Trump Jr created this Life Tributes page to make it easy to share your memories.

Send flowers to the Trump family.